Click here to read the DUTCH version on Tussendelinies

They had to wait for it for 18(!) years, but on the 14th of may in 2017 it finally happened: Feyenoord were crowned champions of the Eredivisie! That league title marked the end of a period of drought, in which Feyenoord went through hell and back. The most horrible memory being the 10-0 loss against PSV back in 2010. But they recovered from that horror and these days the are a regular contender in the European cup competitions, having played in the Champions League or the Europa League in 4 of the last 5 seasons (albeit registering disappointing results overall). This year they ended at 3rd place behind Ajax and PSV, again qualifying for continental football next year. The gap to the two giants of Dutch football is huge though – 18 points – and a revolution lies ahead: both Giovanni van Bronckhorst (manager) and Martin van Geel (technical director) are leaving after this season. Living legend of Dutch football Jaap Stam has already been appointed as the new manager and his task will undoubtedly be to guide Feyenoord back to the very top of the Eredivisie. Based on the current performances, what can we realistically expect from Feyenoord in the near future?

For a club with the history of Feyenoord, it must be frustrating to be “just the 3rd force” of the Dutch football. In past years, both Ajax and PSV made a huge jump in terms of financial power and footballing results. Especially perennial rivals Ajax had an outstanding season, having reached to the semi final of the Champions League. No one expects Feyenoord to be able to reach the same heights as Ajax and PSV in the near future. So they should focus on being the best of the rest and hope to do well in the Europa League. That latter might give them a financial boost and will allow their players to develop, in order to offer better competition to the big two in the domestic league. Add to that the plans to build a new stadium, and Feyenoord might be back in the game in several years.

But that’s definitely not enough. Fans, especially the very loyal members of Het Legioen, always expect Feyenoord to compete and would like to see better results starting from the next season already. But can Feyenoord be expected to do better than 3rd? 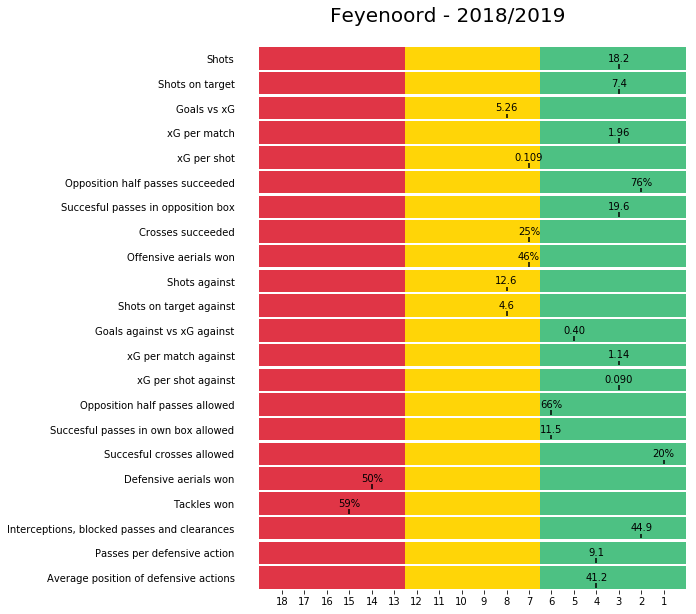 Based on this year’s performances, we can say that Feyenoord is indeed the 3rd force of the league. They are third in quite a few of the key performance indicators shown in the graph above.

On the attacking side, all seems fine. Their attacking output per game of 18.2 shots, 7.4 shots on target and 1.96 xG is only worse than Ajax and PSV. The build-up to this output also seems fine, with the second best percentage of passes succeeded in the opposition half (76%) and third best amount of passes in the opposition’s box (19.6) per match. It doesn’t result in shots of the best quality (0.109 xG per shot) – with 6 teams doing better that might be an area of improvement – but for now the goals are flying in more often than expected, since they scored 5.26 more goals than expected.

On the defensive side their performance is fine too. Even though they allow their opponents to take more shots (12.6) and shots on target (4.6) than a few more clubs than only Ajax and PSV, those shots are not of great of great quality (0.09 xG per shot) and results in only 1.14 xG against per match. In order to further improve their defensive output, they might want to look to improve on their defensive duels (50%) and tackles (59%) won, on which they rank near the bottom of the league. On the other end though, they have the second best (possession adjusted) amount of interceptions, blocked passes and clearances – after (surprisingly?) Excelsior – and are the best team in the league at preventing opponents to complete their crosses against them (20%). So the fact that they don’t win many aerial challenges and tackles might not be a problem, but rather a matter of defending style: maybe they choose not to engage in physical challenges, but decide to prevent dangerous situations by reading the game better than their opponents.

Unfortunately for Feyenoord, while we see stats that need improvement because they are below third best in comparison to other teams, there are almost no stats in which they can compete with Ajax or PSV. The graph below makes it very clear that even though Feyenoord is the third best team in the league based on the performance indicators above, they difference with the two major contenders is quite big. 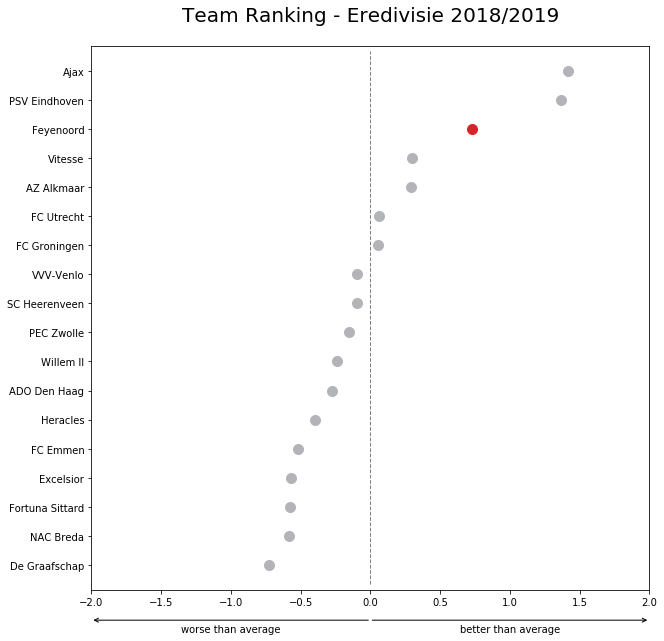 What we see above is that Ajax and PSV deviate the most from the league average, which means they are by far the two best teams in the league. Feyenoord comes next and after them there are two groups of two team: first Vitesse and AZ and then FC Utrecht and FC Groningen. The gaps between Feyenoord and the (group of) teams nearest to them are quite big. On the one side it’s positive to see that Feyenoord perform substantially better than the two groups of above average teams. But on the other side, they are quite a bit behind the league’s two best teams. Ideally, they would want to be much closer to Ajax and PSV, in order to be able to compete for the league title in the near future.

If we look deeper into the key performance indicators, can we identify areas in which Feyenoord can improve, in order to close the gap to the top competitors in the league?

Attacking output depends very much on Van Persie and Berghuis

The underlying numbers show one thing, and it’s not a good thing. It’s maybe even a major point of concern! Looking at xG and expected goals assisted (xGA) – which assigns a value to a pass, equal to the xG value of the shot resulting from that pass – Van Persie and Berghuis are the only two Feyenoord players that can generate numbers similar to players of Ajax and PSV (see figure below). 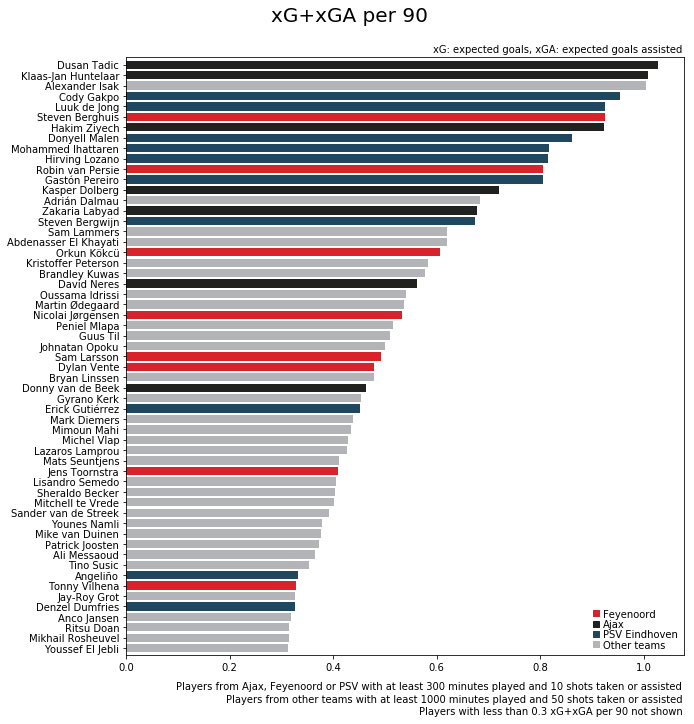 Given the fact that Van Persie is retiring after this season, it leaves (for now) only Berghuis as a big contributor to goals and assists. In order to keep generating solid attacking output, Feyenoord have to come up with something. If we look further down the graph, we see a few Feyenoord players with average xG and xGA per 90: Kökcü, Jørgensen, Larsson, Vente, Toornstra. It is somewhat surprising to see that of those players, the best performer – Kökcü – has only played a handful of games so far. Looking forward to next season, it might be worth a try to give him more game time and maybe even a starting spot in the team.

The rest of the Feyenoord players shown in the graph – Jørgensen, Larsson, Vente, Toornstra and Vilhena – are players who you’d expect more from and therefore have had a disappointing season (except for Vente who is still very young). In order to compete for the top spots in the league, a club like Feyenoord needs more than two players like Van Persie and Berguis. Next season Jaap Stam needs either to get the best out of the disappointing players or look for replacements on the transfer market.

Speaking of the transfer market, there have been rumours in the past that Stam wanted to bring Younes Namli with him from PEC Zwolle. Fortunately for Feyenoord, they didn’t get a chance to sign Namli, since he chose to make a move to FK Krasnodar. If we look at the graph above, we can see that Namli is not quite the upgrade Feyenoord need: his 0.38 xG+xGA per 90 is only better than Vilhena’s.

They might be better off looking at Adrián Dalmau: the 25-years old striker from Heracles has 0.68 xG+xGA per 90. This number is only bettered by players from Ajax or PSV, and Willem II-phenomenom Alexander Isak. Since he is a striker, he could be a good and affordable (according to Transfermarkt) replacement for Van Persie.

Next to Dalmau, there is Peterson at Heracles. His output of 0.58 xG+xGA per 90 also makes him an interestiing option for Feyenoord to look at. 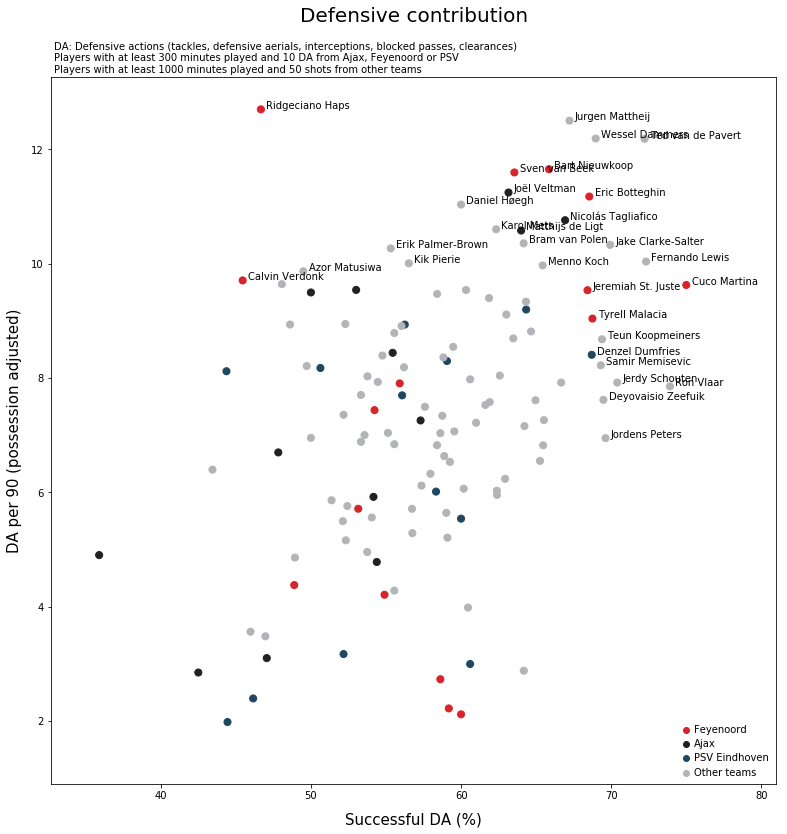 We see a lot of Feyenoord players in the upper right part of the graph, a lot more as compared to Ajax and PSV. This reflects what we see on team level (the first graph in this article): Feyenoord are very good at intercepting, blocking passes and clearing balls away. We see central defenders as well as full backs among Feyenoord’s high defensive contributors. Someone who is missing among the top defensive contributors is Van der Heijden. He played a lot of games this season, is deemed an important player for the club, but his performance stats tell us a different story.

Given that there are many players from other teams in the upper right part of the graph, it might be interesting for Feyenoord to look up there for potential future reinforcements. At left back they look well staffed, but at right back and in the center, they could use one or a few additions.

What to think about Cuco Martina for example? He is on loan from Southampton at the moment and even though the pundits and the media aren’t overly excited about him, his numbers suggest there is nothing wrong with him. With almost 10 succesful defensive actions per match and a succes rate of 75% (best in the league) we can only say he did very well in the second half of the season.

Menno Koch, Jurgen Mattheij, Wessel Dammers and Ted van de Pavert are players with very good stats, but played at a much lower level. It is therefore unlikely that they will be good enough for Feyenoord.

For the rightback position we identify two interesting options: Fernando Lewis and Deyovaisio Zeefuik. The fact that both of them played at big clubs in the past, AZ and Ajax respectively, raises a few questions. In case of Zeefuik: are Feyenoord going to aim for a former player of rivals Ajax? And in case of Lewis: is a player that didn’t make it at AZ, going to be a reinforcement foy Feyenoord? They might be better off looking outside the Eredivisie for a suitable right back.

One last player that is interesting to look at is Jerdy Schouten. He currently plays for smaller brother Excelsior, who have been relegated. If Clasie’s loan spell comes to end and if Vilhena manages to makes a much wanted move elsewhere, there is a gap to be filled in midfield. Is there any better and cheaper option than Schouten to fill that gap?

Even though Feyernoord are the third force of Dutch football, it will be hard to compete with PSV and Ajax. With a few astute transfers though, they might be able to improve their performances on the pitch starting from next season already.

For attacking reiforcements or replacement(s) for Van Persie (and possibly Berghuis), they should give Heracles a call and inquire about Dalmau and Peterson. Trying to get Schouten from Excelsior as an extra option in midfield seems a no-brainer now that Excelsior have been relegated. And for defensive reinforcements they might want to keep Martina and look at Høegh or Memisevic as additional reinforcement(s).

Een gedachte over “What does the near future bring for Feyenoord?”